From Minecraft Wiki
Jump to: navigation, search
This article's name is unofficial.
An official name is yet to be given to the subject matter and may change at any time.

This feature used to be in the game but has since been removed.
Obsidian wall 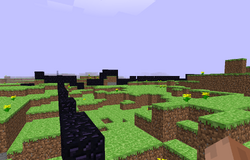 The obsidian wall was an experimental, short-lived debugging structure made up exclusively of obsidian.

Obsidian walls would generate on the uppermost blocks which had an X or Z coordinate of 0. This formed a set of two walls, for the two cardinal directions, intersecting at the center of the world.

The player would spawn at the point of intersection of the two resulting planes. The wall was always made of 2 block high obsidian which was placed on top of existing terrain.