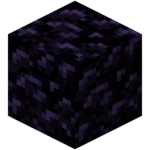 Obsidian is a dark purple block known for its high blast resistance and strength, most commonly found when water flows over lava.

Obsidian drops itself only when mined with a diamond pickaxe or netherite pickaxe; otherwise, it drops nothing.

Enchanting a pickaxe with "Efficiency" and using a beacon with Haste both drastically decrease the mining time. See the obsidian farming tutorial for more information. 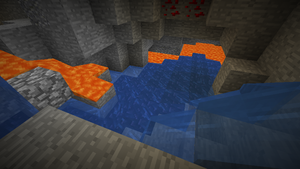 Solid obsidian pillars can be found on the End’s main island, generating all the way down to Y=0.

Obsidian also generates as a part of the end ship in end cities.

Obsidian also generates in woodland mansions with a diamond block concealed by it. These are found in the secret "obsidian room" and "lava room", on the 2nd or 3rd floors.

Obsidian is created when a Nether portal is generated in the Nether or the Overworld. This portal can then be mined, providing a way of obtaining obsidian renewably.

When a player enters the End, a platform of 25 obsidian blocks is generated for the player to spawn on. This platform can then be mined, and gets regenerated when an entity(needs java testing) enters the End. Obsidian pillars also regenerate when the ender dragon respawns.

Using a water spring to mine obsidian.

Obsidian is formed when flowing water hits a lava source block, and can be found naturally where water from a spring or lake has flowed over a nearby lava pool.

Piglins may barter 1 obsidian when given a gold ingot with a chance of 9.43%

Obsidian is useful for building explosion resistant structures as it has, along with anvils, a blast resistance of 1,200; the highest of all blocks obtainable in survival mode. Obsidian also cannot be pushed by pistons, and also cannot be destroyed by the ender dragon.

These qualities make obsidian an extremely effective defensive block, and it is commonly used in many bases in multiplayer servers as protection from griefers.

End crystals can be placed on top of obsidian, which can be useful in PvP combat, or just as decoration.

Obsidian can be used to create a nether portal frame, which can then be ignited using fire. The frame must be a vertical rectangle any size from 4×5 to 23×23. Note that the corners of the frame are not required.

Issues relating to "Obsidian" are maintained on the bug tracker. Report issues there.