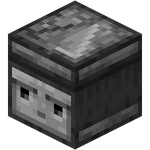 An observer is a block that emits a redstone signal when the block or fluid it faces experiences a change.

An observer requires a pickaxe to be mined. When mined without a pickaxe, it drops nothing.

An observer is placed similarly to a piston. It observes the block that it is placed against. The texture of the detecting side is that of an observing face. As observers can detect the state of other observers, placing two adjacent observers, each watching the other, can make a fast and compact redstone clock. They send out a pulse.

Causes and propagation of block updates are different between Java Edition and Bedrock Edition. As a result, each can detect some kinds of changes that the other cannot. See the table below for a comparison.

When it detects something, the observer emits a redstone pulse of strong power at level 15 for 2 game ticks (1 redstone tick). The pulse can power redstone dust, a redstone comparator, a redstone repeater, or any mechanism component located at its opposite end.

In Java Edition, the pulse is emitted with a delay of 1 redstone tick. In Bedrock Edition, it is supposed to be delayed by 1 tick as well, but is actually delayed 2 redstone ticks due to MCPE-15793, a bug causing redstone delays to be incorrect when components are activated by world changes (which, in the case of the observer in Bedrock Edition, is the only way it can be activated), as opposed to pure redstone components ticking. Its timing can also be incorrect due to MCPE-73342.

It also counts as a block update when the observer itself is moved by a piston. When this happens, an observer emits a pulse after being pushed or pulled, but not beforehand.

Though they block light, observers behave as transparent blocks do in one sense: they cannot be powered by an external power source, nor power themselves with their own output.

Observer can be placed under note blocks to produce "bass drum" sound.

In Bedrock Edition, observers use the following data values:

Issues relating to "Observer" are maintained on the bug tracker. Report issues there.