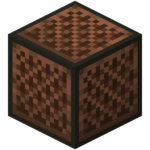 There are 16 different instruments and 25 different pitches per instrument. Pressing use on the block increases the note pitch up a semitone, with a total of two full octaves (25 semitones) being available for each instrument. The standard range (for harp and pling instruments) of notes span from F♯3 to F♯5. After reaching the highest note, pressing use again resets the pitch back to F♯3, as does breaking the block and picking it back up.

The exact pitch to pressing assignment is shown below.[1][2]

Players can roughly check the tuning of a block by looking at the note icon.

In Java Edition, the tuning can also be checked by looking at the right side of the debug screen (accessed by pressing F3). It is denoted as "note:" followed by a number from 0 to 24. 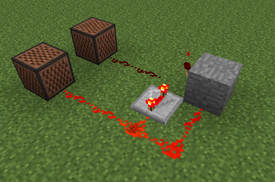