From Minecraft Wiki
(Redirected from Normal)
Jump to: navigation, search 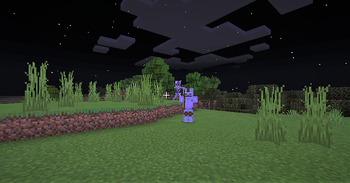 Difficulty is an option in Minecraft that has a direct impact on the ease of gameplay, tailoring your skills depends on difficulty.

There are four difficulty levels in the game: Peaceful, Easy, Normal and Hard. These can be set in the settings, as well as by the /difficulty command.

No hostile mobs can spawn naturally, except for shulkers and the ender dragon, but they cannot deal damage to the player. Also, no spiders, cave spiders, zombie pigmen or endermen – neutral rather than hostile mobs – can spawn naturally. When any of these mobs attempt to spawn (whether naturally, through mob spawners, spawn eggs, or commands), they are removed from the game instantaneously. When the difficulty is switched from any other setting to Peaceful, all mobs that are not allowed to spawn on Peaceful are removed from the world. Players regain health rapidly over time. Despite this, it is still possible to die if damage is received quickly enough. The hunger bar never depletes and players cannot eat anything except golden apples, chorus fruits, and milk buckets unless the player has switched to Peaceful when their hunger bar was below the maximum in Java Edition. Players can eat normally though the hunger bar never depletes.‌[Bedrock Edition only] Additionally, if the hunger bar is below the maximum, it quickly regenerates.

Hostile mobs spawn, but they deal less damage than on Normal difficulty. The hunger bar can deplete, leaving the player with 10

if it drains completely. Cave spiders cannot poison players on Easy difficulty, and the wither does not cause the Wither effect, although wither skeletons do. Lightning sets only the struck block on fire, not surrounding blocks. Zombies do not turn villagers into zombie villagers.

Hostile mobs spawn and deal standard damage. The hunger bar can deplete, leaving the player with 1

if it drains completely. Villagers killed by zombies have a 50% chance of turning into a zombie villager.

Hostile mobs spawn and deal greater damage than on Normal difficulty. The hunger bar can deplete, and the player starves to death if it drains completely. Zombies can break through wooden doors and can spawn reinforcements when attacked. Spiders can spawn with a beneficial positive status effect (speed, strength, regeneration & invisibility) and these effects have an infinite duration in Java Edition. Villagers killed by zombies have a 100% chance of turning into a zombie villager.

The only way to change the difficulty of Hardcore is to use cheats and make it a LAN Server, or use an .NBT editor on the world's .NBT file.

Currently not available in the Realms.

The moon does not actually have to be in the sky for this effect to take place, the moon exists in daytime and across dimensions.

Regional difficulty or local difficulty is a value between 0.00 and 6.75 that the game calculates by considering not just the world difficulty setting, but also the inhabited time of a chunk, the total play time in the world, and the phase of the moon. This value is shown on the debug screen as the first value listed after the heading "Local Difficulty". This value determines several aspects of the difficulty of gameplay (see below).

The total play time in the world is a factor that doesn't begin until after the first hour of play time, and is capped at 21 hours. 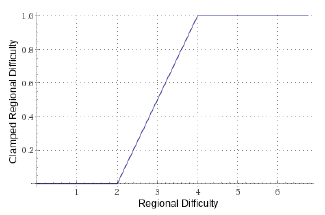