From Minecraft Wiki
Jump to: navigation, search
This article is about the refined item. For the scrap, see Netherite Scrap. For the ore, see Ancient Debris. For other uses, see Netherite.
Netherite Ingot 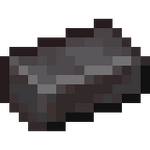 Netherite ingots are items obtained from crafting netherite scraps and gold ingots together, as well as loot from bastion remnant loot chests. Unlike other items, they are immune to fire and lava damage. They are primarily used to upgrade diamond gear and craft lodestone.

Netherite ingots are the repair items for the netherite tier and armor material, and thus can be used to repair the following items in an anvil:

Netherite ingots can be used to select powers from a beacon. The player must select one of the available powers, and then insert an ingot in the item slot.

A netherite ingot can be substituted for an emerald, a gold ingot, iron ingot, or a diamond. The gold option is strictly more efficient than the netherite option; it consumes 3 fewer gold and no netherite material.

Issues relating to "Netherite Ingot" are maintained on the bug tracker. Report issues there.