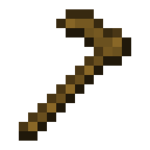 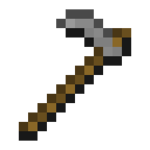 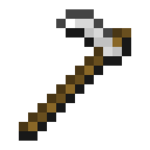 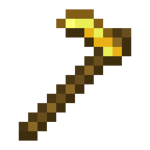 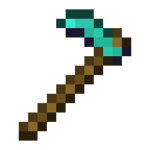 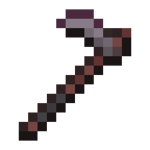 Hoes are tools used to till dirt and grass blocks into farmland, as well as quickly harvest certain blocks.‌[upcoming: JE 1.16]

A hoe can be repaired in an anvil by adding units of the tiers' repair material, with each repair material restoring 25% of the hoe's maximum durability, rounded down.

Diamond hoes can be found in 21.8% of woodland mansion chests in groups of 1.

In Bedrock Edition, they can be found in 21.5% of woodland mansion chests in groups of 1.

Piglins may very rarely barter a netherite hoe when given a gold ingot.‌[upcoming: JE 1.16]

Hoes are used to turn dirt, grass blocks and grass paths into farmland. To till, press use on a grass or dirt block while holding a hoe. This does not work on mycelium or podzol, nor does it work if there are other blocks on top of the targeted blocks, including snow layers.

Tilling is effectively instantaneous, regardless of material, and uses 1 durability. Breaking blocks with a hoe uses 0 durability.

Breaking any other block takes 0 durability if the block breaks instantly, or 1 otherwise.

damage, no more than hitting while barehanded. Hoes use 1 durability when used as a weapon.