This article is about the decorative block. For the fungus used for potions, see Nether Wart.
Nether Wart Block 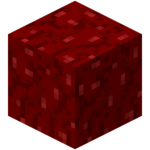 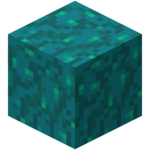 Warped wart blocks are a turquoise variant found in warped forests that currently doesn't have a crafting recipe.

Nether wart blocks can be mined using any tool or by hand, but a hoe is the fastest way to break it.

Nether wart blocks and Warped wart blocks generate as part of huge fungi and in the ceiling and ground of crimson and warped forests.

Both types of wart blocks can be fed into a composter with a 85% chance of leveling up the pile. Compared to a 65% chance using a single nether wart, crafting is still not recommended.

Issues relating to "Nether Wart Block" are maintained on the bug tracker. Report issues there.