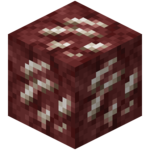 This article is about the ore. For the item, see Nether Quartz. For the mineral block, see Block of Quartz.

Nether quartz ore is ore found in the Nether, and is a source of quartz.

Nether quartz ore can be mined with any pickaxe, or it drops nothing. If mined with Silk Touch, the block drops itself. Otherwise, it drops 1 nether quartz (or more with Fortune).

Smelting Nether Quartz Ore is considered pointless. The ore drops 3.5 experience when mined, and it drops more quartz at any level of Fortune enchantment.

Issues relating to "Nether Quartz Ore" are maintained on the bug tracker. Report issues there.