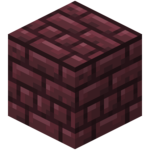 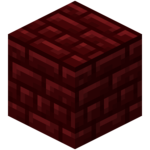 Nether bricks[a] are blocks used to form fortresses in the Nether.

Nether bricks form the walls and supporting pillars of all fortresses.

Nether bricks can be mined using any pickaxe. If mined without a pickaxe, it will drop nothing.

Nether bricks are non-flammable and immune to ghast fireballs, making it a suitable shelter material for the Nether. When walking on it, it makes the same step sound as stone.

If a nether bricks block is inside the whole bounding box of a fortress (not just inside the individual parts), fortress mobs (such as blazes and wither skeletons) can spawn on it if other normal conditions are met.