From Minecraft Wiki
Jump to: navigation, search
This article is about the decorative block. For the fungus used for potions, see Nether Wart.
Nether Wart Block 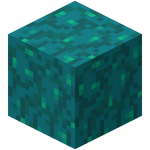 Nether wart blocks and warped wart blocks can be mined using any tool or by hand, but a hoe is the fastest way to break it.

Both blocks can be fed into a composter with a 85% chance of leveling up the pile.

Piglins, zombified piglins and hoglins do not spawn on top of nether wart blocks, although they can spawn on warped wart blocks. Other Nether mobs such as skeletons and endermen are not prevented from spawning.

Issues relating to "Nether Wart Block" are maintained on the bug tracker. Report issues there.