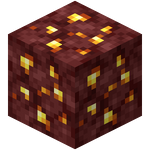 Nether gold ore is a variant of gold ore found only in the Nether.

Nether gold ore requires a pickaxe to be mined.

Issues relating to "Nether Gold Ore" are maintained on the bug tracker. Report issues there.