From Minecraft Wiki
Jump to: navigation, search
This article is about the block. For the item, see Nether Brick.
Nether Bricks 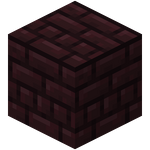 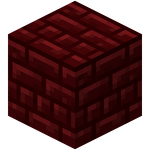