From Minecraft Wiki
(Redirected from Nether)
Jump to: navigation, search

This article is about the dimension. For the advancement, see Advancements § Nether. For the update, see Nether Update. For the portal structure, see Nether Portal. For other uses, see Nether (disambiguation). 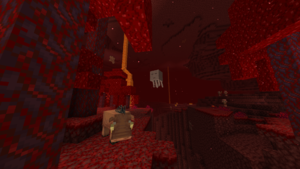 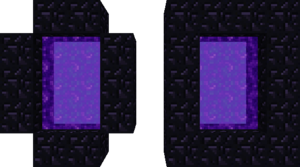 An activated portal allows most entities (with the exception of the wither, the ender dragon, and entities riding or being ridden by another entity) to be transported to a corresponding portal in the Nether. In Survival, the player must stand in a nether portal for 4 seconds to get to the Nether. The player can step out of a portal before it completes its animation to abort the teleport. The portal generates a sound effect while the player is inside it. If there is no corresponding portal, a new 4×5 portal is created. The portal can be destroyed by breaking the obsidian frame, by a nearby explosion, or by placing water in the Overworld or lava into it with a bucket or dispenser. Any of the blocks in the corners can be destroyed without destroying the portal.

Bedrock comprises the top (below layer 127) and bottom 4 layers in a rough pattern, essentially making the Nether 127 blocks high unlike the Overworld´s 256. In the infinite worlds of the Java and Bedrock Editions, the Nether is also horizontally infinite. In Bedrock Edition, the build limit in the Nether is 128 blocks, despite it being 256 in all other dimensions.

All the flora in the Nether is fungus-based as opposed to plants. The Nether "grass" consists of specialized Nether Mycelium (known as "Nylium"). The Nether features its own unique fungi (including Nether wart), as well as equivalent Huge fungi which serve as trees. The stems of the huge fungi function as logs. Other fungus-based vegetation is present in the Nether, including vines and roots.

The Nether features unique cave-like terrain with no sky. Lava and fire are common hazards everywhere in the Nether. Areas distant from the player are shrouded in a fog.

In Bedrock Edition, when Overworld biomes generated in the Nether dimension, at layer 30, the lava sea is replaced with water sea. Passive mobs cannot spawn, while monsters can. Overworld structures cannot generate, but nether fortresses still generate. Nether mobs such as zombified piglins and magma cubes can spawn only as part of the fortress. Overworld mineral veins still generate as normal, but no Nether vein mineral generates. Despite lava springs being the only light source, the lighting is reasonable, as players can still see without light sources. The fog is the same as sky color in the Overworld. No trees generate, and only some vegetation such as kelp, seagrass, flowers, grass, fern, sugar cane, cactus, and mushroom can generate in sparse quantities, and disks are also rare. Additionally, the Nether music track is exclusive to this dimension.