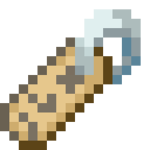 This article is about the item that gives names to mobs. For the nameplate above a player's head, see Player § Username.

A name tag is an item used to name mobs in the world.

Name tags can be caught from fishing as part of the treasure category with a 14% chance after the 5% chance of being a treasure catch. The chance of catching treasure increases with the Luck of the Sea enchantment.

Master-level librarian villagers sell a name tag for 20 emeralds as part of their trade.

To use a name tag, it must first be renamed with an anvil, costing 1 experience level.

If it is not renamed, it has no effect when used on a mob. After the name tag is renamed, the player can use it on a mob to give it the name given to the name tag from the anvil. Mobs and name tags can be renamed any number of times. Name tags with the same name are stackable.

Once a mob is named, it keeps its name and the name tag disappears. (A named silverfish that goes into a block appears to lose its name because it is replaced by a newly-generated unnamed silverfish when the block is broken.)

When a mob is named, it does not count toward the mob cap.

Any mob can be named except for the ender dragon and players.

A name tag can rename an armor stand, though it does not show the nameplate above its head until CustomNameVisible:1b is set as an extra step.

Renamed mobs have their name displayed over their head in the fashion as a mob named through a renamed spawn egg. Their names can be seen only if they are aimed at from four or fewer blocks away.

Mobs that are named using the name tag also never despawn in the world, similar to tamed mobs.[1] The exceptions are wandering traders or if the mob is hostile and the difficulty is switched to "Peaceful".

If a renamed mob kills a player, the custom name is used in the death message in place of the mob type name.

A renamed wither also has a renamed health bar.

Note: This video is outdated, as name tags can now also be obtained from fishing, trading, mineshaft chests, and woodland mansions. You can now also name a sheep "jeb_" to make it fade between its different wool colors and name a rabbit "Toast" to make a new rabbit skin. Villagers can now also be named using name tags.

Issues relating to "Name Tag" are maintained on the bug tracker. Report issues there.