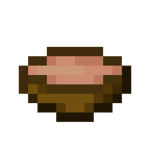 Mushroom stew is a food item.

Mushroom stew can be obtained by “milking” a mooshroom with an empty bowl. This is accomplished by using a bowl on a mooshroom. The bowl gets replaced by the mushroom stew item. There is no cooldown for doing so.

If a stack of more than one bowl is used on a mooshroom, only one bowl is consumed, and the mushroom stew goes into an empty inventory slot, or is dropped if the player's inventory is full.

A bowl of mushroom stew restores 6 (

The bowl is returned to the player empty after the stew has been eaten, and can be re-used to craft more, similar to Rabbit Stew and Beetroot Soup.

Issues relating to "Mushroom Stew" are maintained on the bug tracker. Report issues there.