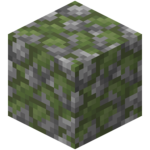 Not to be confused with Cobblestone or Blackstone.

Mossy cobblestone is a variant of cobblestone with moss growing in its cracks. Its texture resembles block of stone with a largely cracked surface and moss spread all over it. It is mainly used for crafting or as building block.

Mossy Cobblestone requires a pickaxe to be mined, in which case it drops itself. If mined without a pickaxe, then the mining is slower and it drops nothing.

Mossy cobblestone can be used as a basic building block, as it is blast resistant and fairly common.

Issues relating to "Mossy Cobblestone" or "Moss Stone" are maintained on the bug tracker. Report issues there.