From Minecraft Wiki
Jump to: navigation, search
For the mob in Minecraft Dungeons, see MCD:Mooshroom.
Not to be confused with Moobloom.
Mooshroom 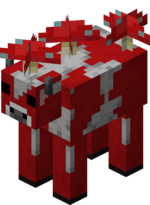 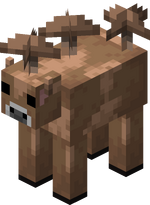 Mooshrooms are mushroom-covered variants of cows exclusive to the rare mushroom fields biome.

Red mooshrooms can spawn in mushroom fields biomes in herds of 4–8, when the light level is 9 or higher, and on Mycelium. They do not naturally spawn in any other biome. A red mooshroom transforms into a brown mooshroom (and vice versa) when it is struck by lightning.

Mooshrooms spawn at light level 7 or above. 5% of them spawn as babies.

A pair of mooshrooms can breed after being given wheat. A mooshroom cannot be bred with a cow unless the mooshroom has been sheared.

Feeding wheat to a baby mooshroom shortens its growing time by 10% of the remaining time.

Baby mooshrooms do not have mushrooms on their backs. Mushrooms appear once the baby grows to an adult.

Breeding two red mooshrooms has a 1⁄1024 chance to spawn a brown baby variant, and vice versa.

When an adult mooshroom is killed, it drops:

Shearing a mooshroom drops 5 corresponding mushrooms and turns the mooshroom into a normal cow, emitting a smaller version of explosion particle. The mushrooms don't grow back.

Like other baby animals, killing a baby mooshroom yields no items or experience.

A mooshroom can be milked by using a bucket on it, yielding a milk bucket. The player can then use the milk bucket to consume the milk, which removes any status effects from the player.

Mooshrooms can also be milked with bowls to give mushroom stew.

Mooshrooms tend to walk around slowly and aimlessly, huffing and mooing occasionally. They attempt to be near huge mushrooms. They avoid danger such as cliffs, fire or lava, but make no attempt to stay out of water.

Mooshrooms have entity data associated with them that contain various properties.

Issues relating to "Mooshroom" are maintained on the bug tracker. Report issues there. 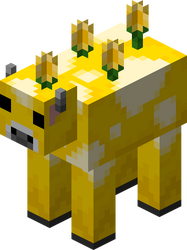 The moobloom in Minecraft Earth.