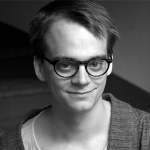 Tobias Möllstam was Mojang's front-end web developer and managed most of the things that were directly related to the company and its websites. He's a longtime coder and designer for the web, but for the last few years he's been into game development which he studied at the University of Skövde. On November 6, 2014, he announced on Twitter that he was leaving Mojang.[2]

He also has a LinkedIn profile.