The Twilight Forest is a mod that adds a new Dimension and many mobs. As the name may suggest, the dimension is filled with dense forests. It contains seven bosses, each with its own structure.

This mod also has an official wiki that contains more updated information.

Here's how you can create a portal to the dimension in the mod.

Specific Instructions: Dig a 2 by 2 hole in the ground (with dirt underneath) and fill with water. Then surround it with any flowers, mushrooms or ferns, then throw in a diamond. Eventually, there should be a lightning strike, then you get an achievement and you can enter into the twilight forest!

The mod has lots of mobs, mostly fairytale mystical-inspired mobs.

Passive mobs never attack the player and may be able to be bred.

Bighorn Sheep are the Twilight equivalent of sheep in the Overworld. They act like sheep and can be bred with wheat. They can spawn in any of the 16 colors, most commonly brown, and rarely white. They can be sheared or killed to obtain their wool.

Wild Boar are the Twilight equivalent of pigs. They act like pigs, and even though they have tusks, they are passive mobs.

Dwarf Rabbits are passive mobs. They can't be bred, and do not drop anything when killed.

Birds are Passive Mobs. They will Follow Players holding Seeds, but Can't be Bred. When killed, they will drop feathers.

Squirrels are passive mobs. They don't drop anything when killed. They're attracted to seeds, but can't be bred.

Ravens are passive mobs. When killed, they can drop a raven's feather.

This is a peaceful mob found in the enchanted forest inside the quest grove. All you need to do is right click on it with every color of (vanilla) wool in the game, then he will drop many rare blocks in the game, like an iron, gold, diamond, emerald and lapis block along with the crumble horn and ore magnets. Also, in the grove there is hidden dispenser with a few colors to start you off with. This is rare structure, in a rare biome. A great place to get wool is in the dimension itself, because it spawns bighorn sheep.

Minotaurs are hostile mobs found in labyrinths. When killed, they will drop raw meef (meef steak if killed by fire), and will rarely drop a golden axe.

Minotaurs, like their name, look like Minotaurs. Minotaur is Greek Mythology. The "-taur" comes from the Greek "ταύρος", meaning "bull". They have a cow head, with red eyes, and twisted horns. They have a chest, and cow legs and feet. They have the same AI as the Minoshroom.

Mosquito Swarms are hostile mobs that are found commonly in twilight swamps. They make a loud mosquito "bzzzzzzz" sound when players are near. Despite their name, mosquito swarms don't fly.

Mosquito Swarms appear to be a small cloud of small black pellets,as if those were the "mosquitoes".They wander all around the swamp.

The Ur-ghast is a giant ghast. It is really big. It can shoot 3 fireballs at one time and if you damage it enough it will start to drop Ghast Tear projectiles. When killed it will drop some Fiery Blood, An Ur-Ghast Trophy, and some carminite.

The Naga lives in the Naga Courtyard. The Naga has ten segments, counting its head. Each time it loses a couple of health points, it loses a segment. And with each segment lost it becomes quicker.

The Naga looks like a green block snake, with red eyes, and scales.

The Lich lives in a lich tower. The lich looks like a king skeleton and can summon zombies. People say he (?) is a former wizard.

The lich has 5 rotating shields around him. The lich and his minions (look exactly like him, except blackish shadowish) can both shoot ender pearls and fireballs; the fireballs explode.

The lich is invulnerable to anything, and is entirely resistant to knockback, as long as it has those shields. To destroy those shields, one must hit the ender pearls towards the lich. You must repeat this four more times to destroy all five shields.

Then, using the zombie scepter, it will summon zombies to attack. Once it runs out of zombies to summon (the scepter has 9 durability, having the ability to summon 9 loyal zombies[verify]), it will attack with a golden sword.

The Hydra can be found in a unique, cracked open Hydra Lair in a swamp or fire swamp. The hydra appears as a massive creature, with two stumpy legs supporting a wide, scaly body. Multiple serpentine necks end in heads that bear a passing resemblance to that of the ender dragon. The entire creature is covered in blue-green and dark blue scales.

The Minoshroom looks like a mooshroom, but having a tall minotaur neck. The head looks like a minotaur, but with a red mushroom on top. It also has black eyes.

Fighting the minoshroom is hard, players are recommended to use a bow or other types of ranged attacks. The minoshroom has an attack range of an iron golem (3 blocks). The AI of the minoshroom is ingenious, walking near you, then doing a charging animation, ramming into you and throwing you into the air.

The snow queen is found in the Aurora palace in the glacier biome at one of the towers. The palace is a maze which contains weapons, bows and other snow-themed items all with unique abilities in secret chests. She also has 125 hearts of health. when killed will drop the tri-bow as well as a trophy, and other items. This is one of the harder bosses in the mod so players must follow the mods order.

The world is full of biomes to give players adventure to the fullest.

The Twilight Forest is a large forest filled with canopy trees usually 20–24 blocks tall and “twilight oaks" that can range from 50 to 100 blocks tall. 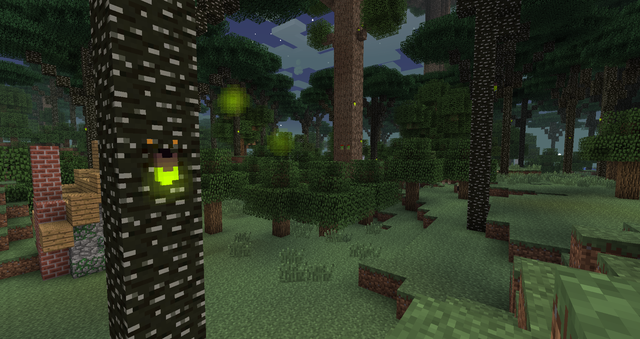 The DENSE Twilight Forest is a denser version of the above: trees so thick that you can walk on them. Usually they have a lot of vegetation, such as bushes (made out of leaves).

The Twilight Swamp features mangrove trees with vines growing on them. A mangrove tree looks similar to an acacia [verify] tree. Many mosquitoes swarm the area. Underneath the swamps, there are labyrinths, where the Minoshroom is found.

A Clearing is like the plains, a mesa, etc. There is not many trees there, making it a good refuge from getting lost in the forest. There is also lots of grass and flowers. Rumors say they are the main place to find labyrinths.

The Dark Forest is a scary place. “Darkwood trees" leave the entire place as dark as being underground. Strangely, ponds and (much less commonly) lava pools generate above the trees. The leaves don't get burnt by the lava pools. Mobs found here include zombies, skeletons, skeletal druids, mist wolves, and king spiders.

The Enchanted Forest is a beautiful place with rainbow trees, ever changing colors, and the only biome where you can find the Quest Ram. Finding both the rare enchanted forest and the even rarer Quest Ram is very lucky!

Glaciers are huge areas with huge slabs of ice, hundreds of blocks high, long, and wide. Lots of penguins are found here. They also have what is called an Aurora Borealis that is nice looking.

A forest similar to the snowy taiga biome. Yetis are swarmed all over mainly in the Yeti Cave, where the Alpha Yeti is located.

The Deep Mushroom Forest, initially named Lots of Mushrooms, is a biome added by Twilight Forest. This biome is usually surrounded by a Mushroom Forest biome. It is different but similar to the Mushrooms biome in that its grass is greener and there are next to zero real trees. It contains flowers as well as gigantic mushrooms. This is the only biome in which the Mushroom Castle can be found.