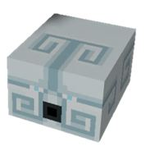 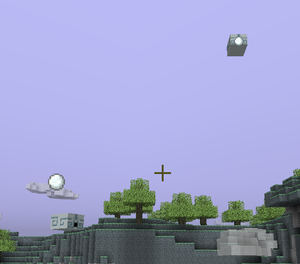 Zephyrs are large, cube like mobs that hurl snowballs at you. When hit by such a snowball you are pushed a significant distance away. Being on the edge of islands or drops is therefore very dangerous when Zephyrs are near because their attacks knock the player backwards, which can cause them to fall off islands/cliffs. Zephyrs are usually considered aggressive mobs but do nonetheless appear on peaceful because they do not inflict direct damage. Zephyrs attacks are also similar to that of a ghast's. However, upon defeat, they drop a stack of cold aerclouds.

Zephyrs spawn in walls of structures yet taking no suffocation damage. Only take damage from below only using phoenix bow thus causing it to take fire damage.

There are also mini zephyrs that defend you. When knocked off the world by a zephyr (or any other Aether mob) you spawn in the sky in the overworld high enough to take enough fall damage to die, so it is a good idea to build your portal around water. A snowball from a zephyr can also knock mobs such as a phyg backwards.

PLEASE NOTE THAT THE IMAGE AT THE TOP OF SCREEN IS THE OLD TEXTURE OF THE Zephyer.