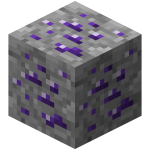 Zanite Ore is an ore found in The Aether.

Zanite can replace any other material in crafting. It gets more durable every time you use it. It can be used to create weapons, tools, and armor. It is the Aether equivalent of the vanilla iron ore. It is a relatively rare mineral, being found in approximately 0.72% of stone from rows 2-61. Most players prefer using Zanite tools over other types of tools due to its comparative commonness, good durability, and ability to mine almost all of the game's blocks.

The ore requires any Aether-grade pickaxe to successfully mine. It is found commonly in cliffs, and as such a mine rarely picks up the ore. It is also found near subterranean lava lakes.

Due to the ability to reclaim the original ore without the use of silk touch, this ore is often used in player traps.

You can use Zanite to make tools and armor that become more efficient as they are used, therefore a pick at low durability will mine quickly. Commonly, players with a tool (Pick, Shovel, etc.) at low durability in the Aether will mine down through their floating isle. Mining on two or more blocks may prevent this.