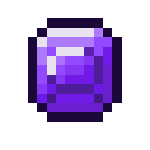 Zanite gemstones are obtained by mining zanite ore found in stone throughout the Aether, they are fairly common in the Aether with a rarity that seems to parallel iron of the Overworld.

Tools made from zanite have the property of growing stronger the more damaged they become, meaning swords do more damage and tools work faster.

If bringing zanite armor into a boss battle it may be advisable to bring multiple nearly broken sets, as zanite armor when it's close to breaking, becomes even stronger than diamond.

Zanite is used in numerous crafting recipes mainly for armor and tools, as well as dart shooters and altars.

Zanite is used to make the second tier of armor in the Aether. Zanite armor provides better damage protection as it loses durability.

Zanite tools work in the same way as all other zanite items getting quicker at mining their respective blocks as they lose durability.

Zanite swords work like their armor and tool counterparts, doing more damage as it loses durability.

One of the first things you should craft after obtaining zanite is the Altar.

Before version 1.9 zanite gemstones were used to craft the nature staff, which has since been removed.