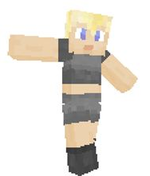 The Valkyrie is a neutral mob found inside Silver Dungeons. They are known to teleport and fly around the player if in battle. Defeating this mob grants you a victory medal. 10 of these are required to fight The Valkyrie Boss.

The Valkyries spawn near the player when you step on a Trap. The mob will only fight when provoked, and is very strong. If the Valkyrie is hit or pushed far from the player, it will teleport somewhere near them or behind them. It is recommended to use The Hammer of Notch or a Bow to defeat Valkyries, for they will not teleport when you shoot at them.

Valkyries seem to be immune to the special effect of the Flaming Sword. They will despawn, like other hostile mobs if on the peaceful difficulty setting. Valkyries will not teleport when they are hit by a projectile of the Hammer of Notch. 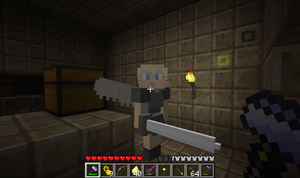 Valkyrie in a Silver Dungeon.
Retrieved from "https://minecraft.gamepedia.com/index.php?title=Mods/The_Aether/Valkyrie&oldid=559084"
Category: