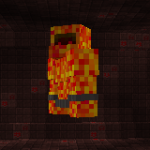 The Sun Spirit is the boss of Gold Dungeon. It is rather hard to kill it, because it cannot be hurt by The Hammer of Notch, Gravitite sword, Lightning sword, etc., only being capable of taking hits from the ice balls it shoots.

The Sun Spirit is a humanoid torso, emitting fire particles. It has yellow eyeballs, and what appears to be a black bracelet. The beast floats in the center of his chamber, taunting you as you right click (annoy) him. You must annoy him many times to fight him.

A Sun Spirit is spawned in every gold dungeon, being the only mob that spawns there.

Sun Spirits will stand stationary in the center of the Gold Dungeon's room, tracking the player's movements when he or she comes within range. The Sun Spirit must be talked to via right-clicking several times before it will attack.

When attacking, a Sun Spirit will float about the room randomly, shooting fire and ice balls. When injured, it will summon a smaller, quicker version of itself to quickly take you down.

Sun Spirits are extremely difficult to fight, as touching the Sun Spirit's body, minions, or fireballs will cause damage, and the fireballs can start brief fires on the ground.

To defeat a Sun Spirit, the player must knock the ice balls it seldom shoots into it. This can be done with melee attacks (including punching), or with ranged attacks, such as arrows or darts. A Sun Spirit cannot be damaged any other way, not even a Lightning sword.

The minions it summons each time it is injured can be defeated using melee or ranged weapons, like other mobs.

Upon defeat, the Sun Spirit will drop both a Gold Key and a Sun Altar.

Also if you die battling the Sun Spirit (Or any of the other bosses) and re-attempt it, its health will not have regenerated.

It can and most likely drop an item known as the sun altar, Able to keep or change time in-game you can use this to make it night or day time at any time!