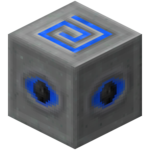 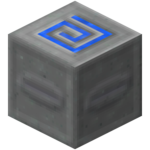 The Slider is the boss creature found at the end of all Bronze Dungeons. It is a large, stone cube with four eyes. When you first meet it, it will be in a 'Dormant' state, and won't start fighting you until you initiate combat by striking it with a pickaxe. The only tool which deals any damage to it is a pickaxe; swords are useless. The Slider is true to its name, and attacks by sliding across, and just above, the floor, smashing into the player dealing heavy damage. This can be difficult to counter if you get stuck in a corner. Occasionally, when the Slider bashes into a wall, it will knock it down! When the Slider is nearly out of health, its eye will turn red, and it will become stronger and more nimble. Although it can be set on fire, with weapons such as the lightning knives, fire doesn't appear to damage it.

A common strategy used against the Slider, is to circle it, so it follows an annular path, never hitting the player. Another strategy is to get it stuck behind blocks, be warned though, this doesn't always work, as often the Slider will merely float up and out of the situation.

Upon death, the Slider will drop a bronze key and some carved stone. The room will light up, and four trapdoors will be revealed in the center of the room. Beneath these trapdoors, there will be a locked chest, which cannot be destroyed, and can only be opened by right clicking on it with the bronze key. Inside the chest, you will find a couple of basic dungeon rewards, alongside some more carved stone, and other miscellaneous items. Although 'Basic', some weapons you can find are extremely powerful, such as the Hammer of Notch.

[Text Taken From The Video Below]

There have been accounts of a Bronze Dungeon with TWO Sliders in it.The link below shows one such account by ALegitTaco.

This site is not liable for any damage this video has caused.