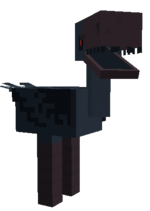 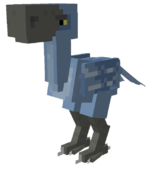 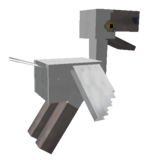 Moas are passive mobs that spawn naturally on any difficulty setting in the Aether. They are large flying birds, and occur in three colors: blue, white and black, from most to least common. They are one of only two mobs in the Aether which can be tamed by the player, the other being the Phyg (flying pig). Moas require considerably more effort to tame than Phygs, but their increased jumping ability may well be worth it, especially if taming a Black Moa. They drop feathers upon death.

Moas will walk around randomly, emitting a soft call which goes from a higher to lower pitch. They flap their wings when falling, similar to chickens, and so do not take fall damage from heights. They will occasionally drop an egg, which can be picked up by the player. Tamed Moas will drop eggs much more common than wild Moas.

An adult Moa cannot be tamed as such, and so the only way to have a tamed Moa is to hatch and rear one from an egg. The player can hatch a Moa Egg by putting it in an Incubator, which can be powered by Ambrosium Torches. When hatched, a baby Moa will appear which can be fed Aechor Petals, to ultimately grow it in to an adult, tamed moa. Tamed moas will still occasionally drop eggs, even sometimes while the player rides it. A blue moa requires 3 aechor petals to grow, a white moa 4, and a black moa 8. Between feeding, a baby moa needs to digest its food; the digestion period normally ranges from 1 to 5 minutes, sometimes a little more. Right-clicking a baby moa with an Aechor Petal in hand will feed it, unless it is still digesting the previous one, in which case the right-click will cause it to follow the player. Once fully grown, tamed Moas can be ridden, much like a Pig. However, unlike a pig, a Moa can also perform multiple mid-air jumps: a blue moa can perform 3 mid-air jumps, a white moa 4, and a black moa 8. As of v1.02, there is also a meter to measure how many more mid-air jumps are left.

However, if you can make a chicken-styled egg collector and put a wild Moa in, you can obtain a good supply of tame Moas. If you make the egg drop onto a Hopper or Minecart with Hopper, or an Obsidian Pipe from Buildcraft, then it will automatically be collected if a chest is next to the hopper or Obsidian Pipe. This is useful because when you come back from exploring or fighting monsters or even resource-gathering, your chest would be at least part-way full. Tame Moas will work with the farm as well, are easier to lure in, and drop eggs faster, but that's a waste of a saddle.

Moas have quite a high health bar for a mob, but they are not invincible and can take damage from a number of sources, including from hostile mobs or the player accidentally hitting the Moa. A Dart Shooter or other ranged weapon can be used while flying a Moa, but care should be taken not to hit the Moa in the back of the head. There is also a small glitch which will sometimes cause the player to dismount if firing straight up too rapidly, and so it is best to either fire conservatively or land first.

You can tame a moa in The Overworld and saddled moas can also be taken down there by touching the lower bound of the Aether in one. However, there is only one way to get them back up to the Aether so you should be careful when flying low, you can only get moas back up by teleporting. The moa's head should turn black shortly before leaving the Aether (this also happens when you are above the upper bound of a map). 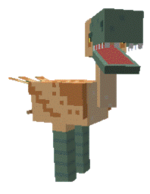