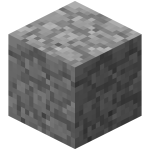 Holystone (also known as Aetherstone or Aetherrack) is a type of block that appears abundantly on naturally generated maps. Next to Aether dirt, it's the most abundant block in the Aether. It can be used to craft tools, the Altar, and the Incubator.

There is also a variant of Holystone which is called mossy holystone. The only difference between the two is its appearance.