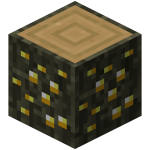 Golden Oak Wood is an uncommon tree only found in the Aether. When mined it will drop golden ambers. The leaves will drop golden oak saplings which can be replanted to create. Golden oak wood is Aether's equivalent to wood. They drop golden ambers. They're created by planting a golden oak sapling and letting it grow. Golden oak wood is a type of block first seen in Aether 1.0.0 They have a skin resembling bark on the four side faces, and a crosscut face on top and bottom. Wood is greatly abundant in Naturally-Generated Island, as it is used as the foundation for golden oak trees. Golden oak logs can be chopped by hand, but using an Axe is faster. It is also flammable.

Of the current wood types, golden oak is the rarest type. They are often used to make plants, trees and wooden cabins. This allows the use of wood as a building material and drops Golden Ambers.

Golden Oaks are also a pretty good indicator of Gold Dungeons. Be extremely careful about these, because they are just one boss chamber. If you enter the boss chamber, you will encounter the terrifying sun spirit, which is almost indestructible. The only way to kill him is to deflect the Ice Bombs that he throws at you every now and then.

Like a normal tree, leaves drop saplings. These saplings can be planted to grow into golden ambers.