From Minecraft Wiki
< Mods‎ | The Aether
Jump to: navigation, search

The Gold Dungeon is the 'third' dungeon from the Aether Collaboration. It appears as a large floating island topped by a small forest of Golden Oak trees. The island has no visible entrances other than a small, hangar-type corridor partially hidden to one side. 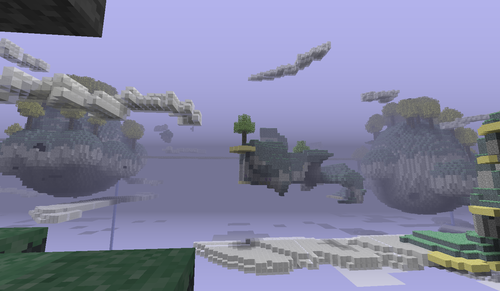 Two Gold Dungeons very close to each other, a rare occurrence.

The Gold Dungeon is home to a single mob, the powerful Sun Spirit boss. Unlike other dungeons, there are no rooms to navigate or puzzles to solve; it leads straight in to the boss fight.

The Gold Dungeon's interior consists of a stone corridor leading to a cubic room made of Hellfire Stone, at the center of which is the boss. There is sometimes a trap in the entrance corridor, being one or more holes in the floor leading to a small underground "trap room", which may or may not be escapeable without building one's way back up to the surface. The boss room itself features a ledge around the perimeter, and sometimes has recessed gaps in the Hellfire Stone to two sides, revealing the Holystone beneath.

The boss of the Gold Dungeon is a large and powerful Sun Spirit with a flaming aura. It will refuse to fight until it is spoken to enough times by right-clicking, and will taunt the player before defying them to battle. Upon right-clicking him the final time, the battle will commence, usually after a short delay (which can sometimes look like the game freezing). The boss will circle around the arena shooting fireballs which explode and set the player on fire on contact. These are not particularly damaging in themselves, but the main source of damage comes from touching the boss himself, which removes over 3 HP with each hit and also set the player on fire. The boss cannot be harmed by any weapon other than the ice balls which it very occasionally shoots. These must be knocked into the boss using a Bow or Dart Shooter or melee weapons, even your hand. On each hit from the ice balls, the boss will send out a smaller version of itself which will continually hound the player until killed. These must be eliminated quickly as they cause large amounts of damage and can rapidly deplete a full health bar. After a number of hits (approximately 10), the boss will fall over in defeat, but not before sending out a final minion which can catch the unwary player offguard. The boss yields a gold key and a sun altar when killed.

Once the boss has been killed, a part of the wall at the back of its chamber will become mineable. Breaking these blocks will reveal a hidden room with a locked chest in it.