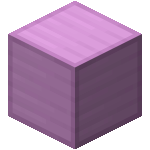 Enchanted Gravitite is obtained by enchanting Gravitite ore which is found in stone throughout the Aether. Gravitite ore is fairly rare in the Aether with a rarity that seems to parallel diamond of the Overworld.

Gravitite is a great armor to use when fighting bosses, although Gravitite's set effect of giving you in some fights; If you don't feel it would be useful for a particular fight, it is advisable to replace your Gloves or Boots with something other than Gravitite.

Enchanted Gravitite is only used to make armor, tools and a sword.

Gravitite is used to make the third tier of armor in the Aether.

Gravitite tools allow you to fling their respective blocks into orbit, useful for fighting mobs (and eventually players) and just looking awesome.

Gravitite swords work like tools with the exception that instead of flinging blocks they fling mobs upwards.