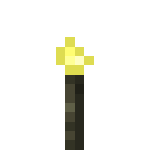 Ambrosium torches are the Aether's equivalent of standard torches from the surface.