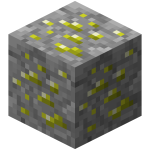 Ambrosium (Also known as Sky Coal) is the Aether's equivalent of Coal, as it can be used to power the enchanter and make Ambrosium torches. It is found just as commonly and can also be eaten to heal half a heart. Ambrosium is a mineral that is a common sight on almost all maps. It is found at almost any elevation, inside caverns, cliff faces, and under islands. A Ambrosium Shard can be mined directly from Ambrosium ore using a Skyroot pickaxe or better. Ambrosium Shard can be combined with Skyroot Sticks to make Ambrosium Torches, or used as fuel in a Enchanter. When burned in an Enchanter, it provides 8 uses for each Shard.

Currently in Aether 1.0.2, mining Ambrosium yields one Ambrosium Shard. Ambrosium is very common to find and are the only ore to appear frequently; Ambrosium ore comprises about 1.25% of all Holystone, regardless of altitude. Common deposits can vary greatly in size - mountaintop deposits are typically limited to five at most.

Ambrosium shards can be used to make Ambrosium Torches, which are the only type of torch that work in the Aether. Ambrosium can also be eaten for half a heart. It was originally 2 hearts.