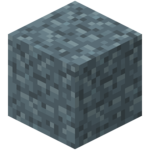 Aether Dirt is one of the base materials in the Aether. It can grow grass like regular dirt. Players can plant skyroot saplings there. Plants from overworld cannot be grown on aetherdirt. This block is one of the most common (of course) blocks in the Aether, it is recommended that you build a house out of either this or Skyroot Planks. The Texture for it is very similar to ordinary dirt but with a change in color. Aether Dirt is one of the first blocks introduced in the game. It utilizes the same texture on all six sides of the block. Aether Dirt is very common on normally generated maps, making up the majority of the top layers of blocks. It is a very weak type of block and is easily destroyed in explosions from TNT or Creepers, making Aether Dirt shelters a fallback option at best. Oftentimes, better resources to make shelters are available from the very moment you enter the Aether. Aether Dirt is generally used for terraforming. When an Aether Dirt block is adjacent to a Grass-covered block and is exposed to a light level of at least 4 (usually from torches or sunlight), it will eventually be converted into a (Aether)Grass block; the exact time this happens is random and unpredictable.

Aether Dirt is simple to mine and is often acquired in large amounts when unmonitored during its excavation. It will always drop a resource block, regardless of how it was mined. It may be mined by hand fairly quickly, but using a shovel will significantly speed up the process.

Using a hoe on a placed block of Aether Dirt will turn it into a Farmland block, enabling seeds to be planted on it (Needs Tested).

Aether Dirt is not used in any crafting recipes whatsoever; the only functionality offered by this block is as a necessity for growing certain plants, and as a cheap material for when a minecrafter wishes to block off branches of a cavern, build walls or scaffolds, or any similar task that requires a medium to large number of blocks that are not affected by gravity.