Arcane Infusion is the "advanced course" in Thaumcraft's magic, by which players can build the most powerful items available. After building the Infusion Altar, the general procedure is to place the item ingredients of the recipe on pedestals around the altar, with the "target" item in the center pedestal. Jars of the required essentia are placed nearby (or later, an essentia mirror is set up).

When the process is started by right-clicking the Runic Matrix with a wand, it proceeds as follows:

At any time, the ritual can be aborted immediately by taking the item off the central pedestal. If any instability has accumulated, it will "come due" with a burst of instability effects, but the entire process will then stop cold.

In order to proceed with infusion, you should have researched and built the following items and structures:

Having set up your Altar with space around it, you need to place pedestals for objects. One pedestal will go in the center; this is where the item goes that you are infusing stuff "into". The jars of essentia you're using will go nearby; their exact placement isn't important, but they need to be within 11 or 12 blocks of the Runic Matrix. It's entirely reasonable to stick your essentia storage, and even your Arcane Furnace, near the Altar (but leave room for the pedestals). Eventually, you'll have "essentia mirrors" which let you put your storage anywhere.

The pedestals around them are where the additional ingredients go: These need to be arranged with 180-degree symmetry, that is for each pedestal, you need to match it with another pedestal on the same Y level, but the same distance on the opposite side in both X and Z. Each unmatched pedestal drastically increases instability (see below, but it's bad), by one or two categories. Given the pedestals, each pedestal occupied by an item should be matched by an occupied pedestal. However, some recipes have an odd number of items. You can't avoid the extra instability from the one unbalanced item, but you should have a matched pair of pedestals, with the odd item mostly-matched by an empty pedestal.

This gives a lot of flexibility, but there's another issue: You want to be able to watch all the pedestals, and quickly get to them to replace items as needed in case of a problem. So, while the infusion will work okay if you put eight pedestals in a box around the altar, it will be harder to keep an eye on and get to all the pedestals. It's better to keep them in two groups on opposite sides, so that you can watch from a third side and never have to run around the altar. For similar reasons, it's best not to have them right up against the altar, but to leave a space between the altar and pedestals. The pedestals don't actually have to be on the same Y level as the altar, but in practice, it will be easier to work with them if they're all on the "obvious" level.

While it's okay to just leave eight pedestals out, that can be confusing if you're using fewer items, and there's some risk of accidentally putting or replacing items in the wrong (unmatched) positions, That's not as bad as an unmatched pedestal, but it does hurt. So it's worthwhile to mine away any pedestals you won't be using, and replace them as needed for each infusion.

Note that the range for checking pedestals is a full 9 blocks from the Runic Matrix, so avoid using pedestals for displaying items anywhere near the Altar. (If such an item is in range, it will spoil the recipe, and the infusion will not begin.

In general, if a recipe is incorrect (wrong items present, items missing), the infusion will not start at all. However, there's an important caveat there: The ingredients for an infusion (except the central item) may not be damaged, enchanted or renamed. (That is, no NBT data.) Furthermore, for the Travelling Trunk recipe (and presumably any future recipe with a golem for an added ingredient), the golem must be "virgin", having never been placed in the world. (Make sure that you do not shift-click, to avoid placing the golem instead of putting it in the pedestal.)

If any ingredient item is "imperfect", the infusion will go on apparently normally... until it is time to absorb that item. Then, the infusion will stall, absorbing more essentia and accumulating instability until disaster strikes. 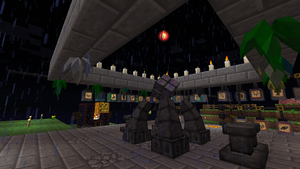 For all but the most basic recipes (and preferably for those too), it's necessary to have other items around the altar to reduce instability. The relevant items include crystal clusters (color does not matter), mob heads (mostly provided by other mods), and especially magical candles.

These items need to be symmetrically balanced in the same way as the pedestals, but they can, indeed should, be placed above or below the altar level, to avoid having them washed away by flux. (Unbalanced items count against stability.) Note that any stabilizer will "match" any other stabilizer, for example a crystal cluster will properly balance a candle.

Stabilizers can be placed anywhere up to 9 blocks away from the matrix horizontally, 5 blocks above, or 10 blocks below. Given that hundreds of stabilizer items can be needed for advanced infusions, it is usual practice to dig out a "candle room" beneath the altar, where large numbers of candles can be arranged in layers. However, for beginning infusions, it will suffice to put the stabilizers on blocks around the altar, or on a ring of blocks overhead (not directly over the altar or pedestals, to avoid gaseous flux).

Historical Note: In older (4.0) versions of Thaumcraft, several other blocks counted as stabilizers: Nodes, Nitor, and especially the "glimmers of light" produced by an Arcane Lamp. While nodes could be removed or balanced, and Nitor could be arranged symmetrically, it was critical that an Arcane Lamp must not be lighting the area, to avoid many near-inviisible and unbalanced glimmers. In version 4.1, this has been changed, and all of these blocks are ignored by infusions.

Instability is the main hazard to infusion. Most often it merely disrupts the process, but it can also damage the player, and extreme cases can even produce explosions.

Each recipe has a "starting" instability, which has an internal numeric value but is shown as a category: "Negligible" corresponds to an instability value of 0 or 1, "Minor" to 2 or 3, "Moderate" to 4 or 5, "High" to 6 or 7, "Very High" to 8 or 9, "Dangerous" to 10 or more. To this is added a penalty for any failures of symmetry, then a bonus is subtracted for any properly-placed stabilizer items. An unmatched item adds 1 to the instability (and some recipes require an unmatched item), an unmatched pedestal adds 2, and these do combine. It takes 10 properly-matched stabilizer items to counter 1 point of instability. Stabilizers can reduce the starting instability below zero, which can help counter later increases.

Instability grows randomly over the course of an infusion. The chance of increase depends only on the recipe instability, so stabilizers will not slow or prevent this increase, only reduce the total. (On the other hand, neither does the growth "feed on itself".) However, the chance to increase is checked each time a point of essentia, level, or item is consumed, so recipes which cost a lot have more opportunity to increase. The chance is 1 in (50 - recipeInstability×2), each increase is 1 point. Note that doing Infusion Enchantment or Runic Enhancement on an item which is already enchanted or enhanced increases the cost, and thus the overall increase. Also, any problems which delay the infusion (items are missing when they're needed, running out of essentia, or discovering belatedly that an item is "imperfect") will make things worse the longer they remain unfixed. Instability never goes down -- if things are getting really out of hand, abort the infusion (by removing the central item) and start over. (With more candles!)

For each game tick of the ritual, there is an (instability/500) chance of something bad happening: Flux lightning, knocking an item off its pedestal, producing flux, melting an item into flux, tainting the player, or in extreme cases, an explosion. The total instability is capped at 25, which would average 1 incident per second.