This mod by Jamioflan allows you to fly planes in Minecraft, allowing players to create 7 different planes, as well as 4 vehicles and two mechs and fly/drive them around. This mod is for both singleplayer, and multiplayer.

Included in this mod are:

Two-Seater Biplane: carries two people or one person and a wolf, five cargo slots, Not Dangerous. 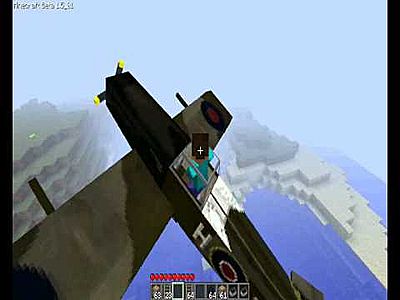 sherman Tank (WW2 Tank)carries two people, and has 2 guns, a cannon and a machine gun

Proto titan (Mech) carries one person, and can equip 2 guns or 2 mining tools

Alpha Titan (Mech) carries one person, and can equip 2 guns or 2 mining tools

1. Go to this page, look for "Recommended 1.6.4" and download the installer on that line. Run the installer. If it fails, check the Forge FAQ

Give the profile a name and select a directory for it. (This should not be the default directory, you don't want to overwrite your vanilla worlds) In the "Version Selection" section, scroll down the "Use Version" drop-down and select "release_1.6.4-Forge..." (There will be version numbers after "Forge").

If done right, the main Minecraft menu will say "Minecraft Forge" with a version number in the bottom left. Now continue on to the next section to install Flan's Mod.

4. Copy the "Game Directory" and navigate to it in your computer's file browser.

7. Drag the downloaded FlansMod-x.x.x.jar into the "mods" folder.

9. Now run Minecraft through the launcher and quit.

10. Returning to your game directory, there should be a "Flan" folder.

11. Put all the content pack zips (don't extract them) in the newly created "Flan" folder. Run Minecraft again and you should be good to go.

2. Put them into the Flan folder in your .minecraft directory

for both start with a clear .minecraft with updating minecraft

Default controls for planes are:

These can be changed by editing the included planes.properties file.
For the Anti-Aircraft guns, simply right click to get on and left click with an Anti-Aircraft shell in your inventory to fire

The plane components are crafted in the 3x3 grid, but needs final assembly in the special 5x3 grid included in the mod.

To craft a plane, one needs to make the following parts: A propeller, an engine, some wings, a tail, a cockpit, and some wheels. Some planes require more than this, like the Spitfire requiring a bomb bay.

First of all, you are going to need your 5x3 Plane crafting grid to make the planes.

Then decide which plane you want to make.

The two seater biplane has the same recipe as the normal biplane, but with an extra wooden cockpit in it.

The current version of airplanes can be found in this thread.