A Millénaire town with adjacent hamlets

Millénaire is a mod that aims to "fill" the Minecraft world a little by adding pre-generated villages to it, with a loose 11th century theme to them. Those villages will appear occasionally in newly generated areas, with villagers of different kinds working. You can trade with them for items such as wood and cider, helping them develop their village.

Villagers in each village perform specific tasks, such as Lumbermen collecting wood by chopping down trees and planting new saplings, farmers planting and harvesting crops, and traveling merchants moving between villages to trade.

For a full list of features and updates see the Millénaire Wiki page. 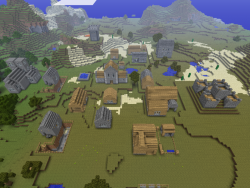 A village that deals mainly on food production. Start with a town hall, a lumberman hut, and two farms.

A village that provides tools, weapons, armor and other commodities but hoards a lot of resources. Starts with a town hall, cattle farm, and quarry

A village more of the religious order. Starts with an abbey, lumberman's hut, farm, and cattle farm

This Settlement provides safety in the face of hostile monsters. Starts with a fort, two lumberman's hut's, and a pig farm

A village that can sustain itself and expand on its own. Starts with a fort, lumberman's hut, farm

Gros Bourgs host only "advanced" buildings. They can have up to three hamlets surrounding them (depending on space available) and depend entirely on these hamlets for agricultural and construction goods. They start with a fort, two guardhouses, and an inn, and can be surrounded by an artisanal hamlet, agricultural hamlet, and/or ecclesiastical hamlet.

The second Culture added to Millénaire, the Indians are based on rice-growing villages from the Ganges valley and speak Hindi. Their villages are centered on Palaces, Forts and Chief's Houses. Their rich cooking is based on growing rice, Turmeric, sugar canes and raising chickens, from which the player can make vegetarian and chicken curries. They build mostly from mud bricks and cooked bricks, special blocks produced in a kiln. This culture has Dialogue for the villagers to speak when resting

The third culture added to Millénaire, the Mayans were designed by MinerMiah. They live in military, agricultural, or religious villages and build huge stone and cobblestone structures. They can grow corn, from which they make Mayan food: Masa (corn tortillas) and Wah (a tortilla wrapped in chicken meat). They also create great Mayan sculptures and ornamental gold blocks with which to decorate their palaces and temples. This culture has dialogue for residents to speak, when they are not busy.

The Japanese Culture is the fourth to be added to Millénaire. The Japanese have military, religious, or agricultural villages. Agricultural villages have either the usual farms or a sake brewery. Japanese buildings are very detailed and stunning, using paper walls and Timber frames. They farm Rice to make the food Udon and farm Wheat to make Thatch. They also have very good weapons such as the Tachi Sword, as well as two sets of armor. Japanese are from the Heian Period of Japan's History and are known as the Heian people.

The fifth Culture added to Millénaire was designed by Ticlon. The skillful Byzantines are the last remnants of the once great Roman Empire. Besides making wine from grapes and farming silk to make expensive icons, they also use tiles to recreate the legendary architecture of their ancestors. There are religious, military and retail-based villages. This culture has dialogue for the villagers to speak when they aren't busy.

The religious villages are led by patriarchs. Starts with the church, an architect's house, a lumberman's hut, two groves and a farm.

Equipped with a mighty fort and led by an as mighty centurios this villages focus on the production of tools. Starts with the fort, an architect's house, two lumberman's huts, two groves and a fisherman's hut.

Currently the only village that is guaranteed to have a market hall. Starts with a town square, an architect's hut, a lumberman's hut, two groves, a fisherman's hut, a quarry and an inn.

A villager in the process of constructing a new building

The main "aim" of the villagers is to improve their village. There is between six and ten initial villagers, but their number will grow as they have children and build new houses. They can also build new types of buildings and improve existing ones. For this they need building materials: wood, cobblestone, glass and stone. They can acquire the resources needed themselves or by trading from the player. There are four different types of villages, each with a slightly different set of buildings upon completion.

There are eight Norman locations at which the player can trade with the villagers: their Town Hall, Bakery, Tavern, Forge, Armory, Pig Farm, Cattle Farm, and the Sheep Farm. (when built):

To trade, players must go to one of the locations in question and stand near the chests. If no woman is around one will arrive shortly. Right-click on her to bring up the trade screen.

Pressing the "V" key will, if a village is nearby, display its name, the distance to it and the general direction. Most new worlds should have villages near the spawn point. If that doesn't work try the "N" key good luck!

Two Millénaire villagers outside their house

There are currently nine types of Norman villagers:

The currency used by the villages for trading with the player. Comes in three values: normal, argent (silver) worth 64 regular ones, and or (gold), worth 64 argent.

This inedible apple is collected by lumbermen and used to make Cider and Calva .

Made by villagers from cider apples, this refreshing drink heals two hearts and can be used three times.

More properly known as Calvados, This apple brandy from Normandy heals two hearts and can be used ten times. It is made from Cider at the tavern.

This famous Norman dish is just the thing to have after a long time spent working outside in the cold, or after a nasty Minecraft fall. It heals five hearts and can be used three times.

Almost as good as Tripes, Boudin noir heals three hearts and can be used three times.

This amulet dedicated to Odin will warn you of incoming danger by lighting up if an unnatural creature is near. Useful to avoid them - or to seek them out. The Amulet can be bought from the Viking merchant at the market. It has a colored circle in the center. The color gradually changes as mobs get nearer, from light blue (like diamond items) to bright red.

Brought to the Norman shores by the Vikings and crafted in the shape of Thor's hammer, the Amulet of the Dwarves will guide you to the Earth's riches. The Amulet can be bought from the Viking merchant at the market. The bottom of the amulet glows bright yellow when there is an ore vein in your vicinity, though it does not point to which direction.

Engraved with Yggrasil, the World Tree of Norse mythology whose roots reach the bottom of the world and whose branches touch the tip of the sky, this amulet will ensure you always know how high or deep you are. The Amulet can be bought from the Viking merchant at the market.

The Millenaire mod also has its own set of tools which can be obtained from a stocked Forge.

The Norman Armor set gives you an extra 50% more protection than the Diamond Armor set. It is really good and gives a lot of armor.

This sword has more durability and strength than a diamond sword.

Hand-made by the fort's lady in person, those epic tapestries will decorate the most sumptuous banking halls. Designs are taken from the Bayeux Tapestry, with the biggest a massive 15x3 depiction of William the Conqueror's fleet sailing for England. This item is acquired by selling wool in the fort. When you do so, the Lady in the Fort will start making them, and they will be for sale.

These are in-game Millenaire parchments that give you a brief description of the Buildings, Items, and/or Villagers. There is also one parchment you may buy that has all information about that culture's villages.