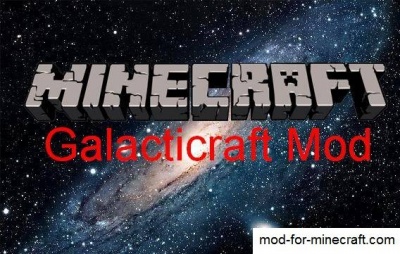 Galacticraft is an advanced space travel mod created by Micdoodle8. This is an unofficial wiki on this famous mod, and there is much content added with this mod, such as ores, flyable rocket ships, etc. When the mod is finished the player will be able to travel to all planets in the solar system.

Tin, Copper and Aluminium Ores are found at all levels, whilst Silicon is found at bedrock depth. All these ores can be smelted normally in the furnace except for silicon, which is used in a circuit fabricator instead.

There's a lot of new mobs added in Galacticraft, but there will be much more soon. Currently the only new mobs are:

The majority of the new mobs are mostly evolved counterparts of the Overworld mobs, with boss versions of the Evolved Skeleton and Creeper. These Bosses can be found on Mars and the Moon dungeons. The Slimeling and Sludgeling can be found on mars, The Alien Villager is found in moon villages, and the evolved mobs (except for the bosses) can be found underground in moon and mars caves, and also on the surface of the 2 planets when it is night.

These are currently the only 4 celestial objects that you can travel to. There is a cool Galactic map you can access when you press 'M'. This map shows all the planets and moons in orbit of the sun. You can also click on each planet/moon with left mouse, and it will list the players at the selected location. This will not work on the Overworld.