From Minecraft Wiki
(Redirected from Mob of Me)
Jump to: navigation, search
Mob of Me 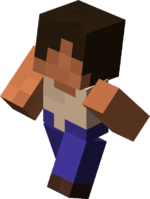 A Mob of Me is an entity used to place NPC human characters into the world in Minecraft Earth.

A Mob of Me can be obtained from chest tappables, purchasing buildplates, or adventures.

When a player edits or changes their skin, the mob changes in sync with the player's skin. It also roams around a player's world similar to that of a villager and can interact with blocks such as doors. It is also attacked by hostile mobs and drops itself upon death.[citation needed]