From Minecraft Wiki
(Redirected from Mineral)
Jump to: navigation, search

For other uses, see Ore (disambiguation). 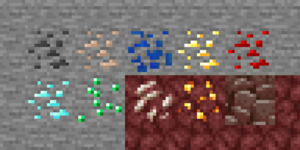 Redstone has the same layer and line-size statistics as Diamond, but is generated 8 times per chunk as opposed to 1.