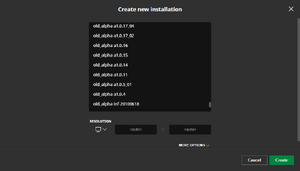 To play old versions of the game, go to the Installations tab, enable Historical Versions if necessary, create a new profile, and set it to the specified version. Because these versions are outdated and unsupported, they may contain bugs and errors which are not present in newer versions, and these will never be fixed. It is recommended to run old versions of the game in a separate directory to avoid save corruption or other problems. To do this, enter the desired folder path into the "game directory" field in the profile settings. Mojang also recommends backing up worlds in case any corruption occurs.[4]

While the launcher is able to run these versions in a playable state, they don't work perfectly. Changes to the game's code and Mojang's servers have resulted in some features of these versions no longer working as they did originally. Most of this functionality can be restored with the use of third-party tools, however. Some things which are broken include: