If the chest contains items, the items are also be dropped when the chest is broken. If one half of a large chest is destroyed, the corresponding items from the destroyed chest are dropped and the remaining half continues to function as a small chest. 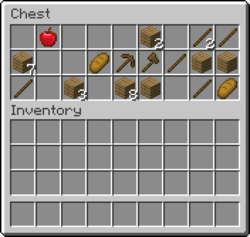 Example of loot in a bonus chest

The bonus chest is a chest with items that act as a starter kit. If the "Bonus Chest" option is set to "ON" in the "More World Options..." in Java Edition or "Game Settings" in Bedrock Edition part of the "Create New World" screen, a single bonus chest is generated in the world. It appears somewhere near the player's initial spawn point, with up to four torches generated around it on adjacent blocks.

The Bonus Chest option is not available in hardcore mode or on servers, thus making the bonus chest unavailable as well.

The bonus chest generates with a semi-random collection of basic items that can help the player survive early on, getting them started at gathering resources, and making the objective of building an initial shelter easier.

In Java Edition each bonus chest contains items drawn from 4 pools, with the following distribution:

In Bedrock Edition each bonus chest contains items drawn from 14 pools, with the following distribution:

The bonus chest will not disable achievements and leaderboard updates.

A chest placed adjacent to another chest joins to create a large chest (also known as a double chest). A player can prevent this, and place two small chests side-by-side, by sneaking while placing the second chest, or placing the second chest facing a different direction from the first chest.‌[Bedrock and Java editions only] Alternately, trapped chests do not combine with normal chests. 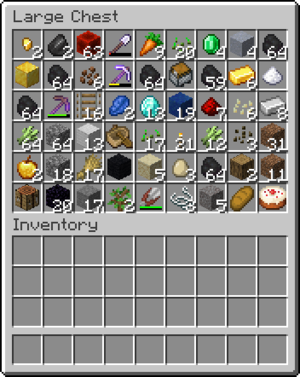 A chest cannot be opened if there is an opaque block above it (in Bedrock Edition, bottom-half slabs prevent chests from being opened). Solid faces do not prevent chests from opening, so the lid of the chest can phase through blocks such as bottom half slabs, bottom half stairs, and transparent full cubes such as glass and ice. Ocelots and cats will prevent chests from opening. Since chests themselves are (functionally) transparent, two chests can be stacked on top of one another while still allowing the lower chest to be opened. Players can open chests when players are being hurt (effect of instant damage, poison, wither, fatal poison or on fire) or hurt by anyone (players, zombies, skeletons, etc).

On December 24–26, chests, large chests and their trapped chest counterparts have their textures changed to "Christmas chests" that look like wrapped Christmas presents. Since the game uses the date shown on the computer, players can access the Christmas chest textures at any time by changing the date and time on their computers to 24-26 of December.

Issues relating to "Projects/Vietnamese translation/Rương" are maintained on the bug tracker. Report issues there.