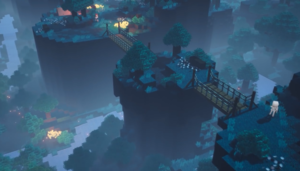 Valorie in the Creeper Woods.

The Creeper Woods is the second location in Minecraft Dungeons. It has a chance to generate a secret upon loading, that if found, grants access to Creepy Crypt.

The Creeper Woods is a wooded area that appears much similar to a Forest biome. It contains multiple monoliths, hills, narrow bridges, rope-bridge walkways leading to other monoliths and rivers down below. The area is also shown to be foggy and dim. There are also fungi that light the woods with a weird glow.

The area also has a spooky tone as there are giant creeper heads and totems.

Somewhere in the woods, a caravan is transporting Villager prisoners to labor in far-off lands. The Illagers have constructed rudimentary jails for the villagers. There are vindicators patrolling to deter villager's escape attempts. They made it dim by only having embers from the campfire to light up the environment.

The heroes start their first quest by finding the caravan in the mob-infested maze and stopping the Illagers. Eventually, after freeing the innocent villagers, the villagers are safe from the clutch of the Illagers.