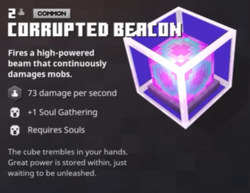 The Corrupted Beacon is a common item in Minecraft Dungeons that can project a harmful light beam to hostile mobs.

The Corrupted Beacon can be used to fire a beam of purple light that does 73 damage per second. It requires souls (which you pick up from certain defeated enemies) to work.