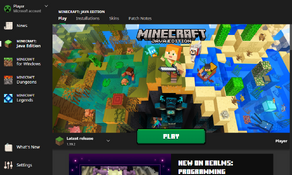 The current launcher is the eigth launcher for Minecraft: Java Edition, and the third that was built to automatically update itself.

To play old versions of the game, go to the Installations tab, enable Historical Versions if necessary, create a new profile, and set it to the specified version. Because these versions are outdated and unsupported, they may contain bugs and errors which are not present in newer versions, and these will never be fixed. It is recommended to run old versions of the game in a separate directory to avoid save corruption or other problems. To do this, enter the desired folder path into the "game directory" field in the profile settings. Mojang Studios also recommends backing up worlds in case any corruption occurs.[4]