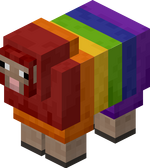 The Rainbow Sheep is a rainbow variant of the sheep found only in Minecraft Earth.

Rainbow sheep are a rainbow-colored variant of the normal sheep. They bear similarities to the sheep nametag Easter Egg in the base game, but unlike it, the rainbow sheep does not change colors. Their wool goes in a rainbow pattern with the red section being the biggest one and covering the front part of the sheep, orange wool covering its lower front legs, and yellow, green, blue, and violet stripes run along their body. The wool on their hind legs is violet in color.

Rainbow sheep behave the same as a normal sheep, walking aimlessly and avoiding cliffs and lava. They can be sheared for rainbow wool and they regrow their wool when they eat grass, just like normal sheep.

Rainbow sheep can be obtained as a reward in Season 5 by having a bone block, coal block, and red sandstone in the Journal, they can also be obtained by buying the "Colorful Cottage" Buildplate. They are of epic rarity, and can be obtained via sheep tappables with a 1.7% chance of getting one.

When killed, they can drop: