This Minecraft Earth article is a stub.

You can help by expanding it.
Mob of Me 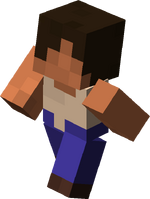 A Mob of Me is an entity used to place NPC human characters into the world in Minecraft Earth.

When a player edits or changes their skin, the mob changes in sync with the player's skin. It also roams around a player's world similar to that of a villager and can interact with blocks such as doors. Although they can climb down ladders like many mobs, they cannot climb up them and do not appear to recognize them as valid pathways. It can also be attacked by hostile mobs and drops itself upon death. Horned sheep also attack Mobs of me without provocation. If a mob of me is killed on a buildplate, a death message appears near the top of the screen (for example "Your Mob of Me was shot by arrow") and the Mob of Me is returned to the player's inventory. Interacting with the Mob of Me, or tapping on it with a empty hotbar slot, brings up an interface that lets the player change the skin of the mob of me to any other skin available in five skin slots. It randomly defaults to Steve or Alex if no skin is chosen.