This Minecraft Earth article is a stub.
You can help by expanding it.
Midnight Chicken 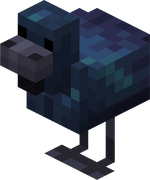 A Midnight Chicken is a passive mob and a dark-colored variant of the chicken found in Minecraft Earth.

Midnight chickens are a rare mob drop from chicken tappables, with a 4.6% chance to get one.

Midnight chickens are a dark-colored variant of the chicken. Their plumage is dark-bluish in color, making it reminiscent of coal or obsidian. Their beak is dark in color with a gray stripe running across it. They also possess dark-colored legs.

Midnight chickens have the same AI behavior as ordinary chickens. They wander aimlessly, avoiding lava and cliffs that are enough to cause fall damage.