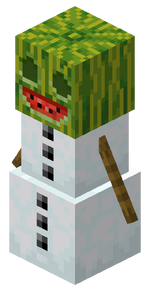 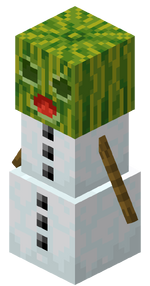 A Melon Golem is a variant of a snow golem with a melon as the head as opposed to a carved pumpkin, found only in Minecraft Earth.

Melon golems are found in grass and pond tappables with an uncommon rarity and a chance of 1.1% from grass tappables, and 1.8% from pond. They cannot be created by placing a full melon on top of two vertically stacked snow blocks, differing them from their snow golem counterparts. They can also be obtained as a reward in the Season 6 Prize Map.

Melon golems function nearly the same as snow golems by placing snow wherever they walk and attacking hostile mobs with projectiles. In fact, the only differences between the two are that the melon golem has face animations, a different head which cannot be snipped off with shears, and melon seed projectiles instead of snowballs. Additionally, they shoot in a burst of 4 melon seed projectiles. They also move by hopping around. They are not hostile toward tropical slimes. 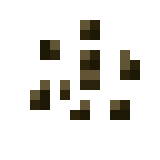 of projectile damage upon hit.