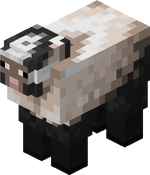 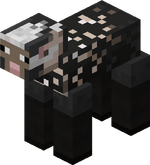 The Inky Sheep is a passive mob and a variant of the sheep found only in Minecraft Earth.

Inky sheep are an uncommon mob drop from sheep tappables, with a 4.7% chance of obtaining it. It was also previously obtainable as a reward in Season 7.

Inky sheep are a beige-white variant of the sheep. The wool near their face consists of two black stripes running from the back toward the side of their face, separated by a white patch of wool. Their rear end and legs are completely black in color, hence the name. Unlike other sheep, their face is rather lightly brown in color.